Fábulas » The fox and the grapes

It was very hot and sunny afternoon. A fox, which had been hunting the whole day, was very thirsty. “How I wish there was some water,” the fox thought to himself.

Just then, he saw bunches of fat and juicy grapes hanging from a vine above his head. The grapes looked ripe and ready to burst with juice.

“Oh my, oh, my!”, the fox said as his mouth began to water. “Sweet grape juice, quench my thirst!” 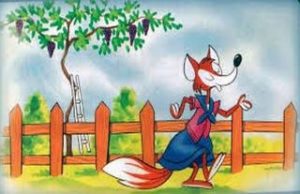 The fox stood on tiptoe and stretched as high as he could, but the grapes were out of his reach.

Not about to give up, the fox walked back a short distance and took a running leap at the grapes. Again, he could not reach the grapes.

The fox jumped and leapt, again and again, but each time he could not reach the grapes. Until, at last, the fox was tired and thirstier than ever.

“What a fool I am!” said the fox furiously. “These grapes are sour and not fit for eating. Why would I want them anyway?”

With that, the fox walked away.

MORAL: Some people disdain and underestimate what they cannot have.